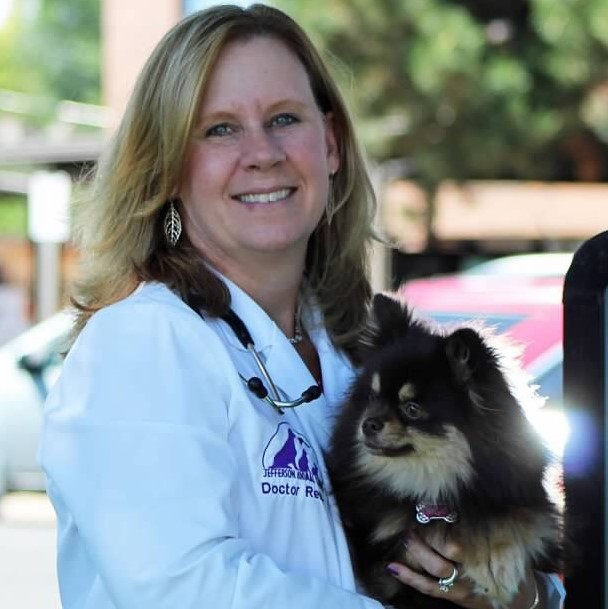 Known as Dr. Renee, she is co-owner of Jefferson Animal Clinic. She was born and raised in Colorado. She has always wanted to be a veterinarian, ever since she can remember. After graduating from Thomas Jefferson High School she attended Colorado State University. There she received her Bachelors of Science degree in Equine Sciences in 1994 and her Doctor of Veterinary Medicine Degree in 1998. Dr. Renee enjoys both the medical and surgical aspects of her career and feels very honored to be apart of the human animal bond.

Outside of her career she enjoys outdoor activities and spending time with her family, which consists of her daughters Sydney and Lyndsey, husband Russell, 2 dogs, 1 cat, and 2 horses. Her favorite saying is “Learn from yesterday, live for today, hope for tomorrow.” Her life goal is to live life honestly and fairly. 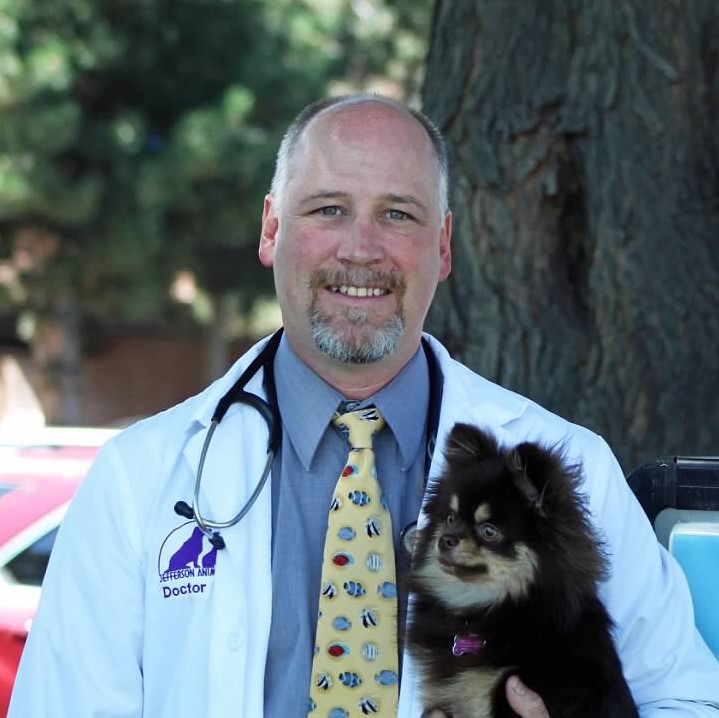 Known as Dr. Russ, he is co-owner of Jefferson Animal Clinic. He received his Doctor of Veterinary Medicine degree from Colorado State University in 1996 and holds a Bachelor of Arts Degree in Biology from The University of Denver. He enjoys working with dogs and cats as well as exotic species (ferrets, rabbits, rats, mice, hamsters, and birds). He also enjoys performing orthopedic and dental/oral surgeries. His spare time is spent building fences, plowing snow, surfing the Internet and enjoying Colorado with his wife and daughters Sydney and Lyndsey. Life goal: get back to Africa. 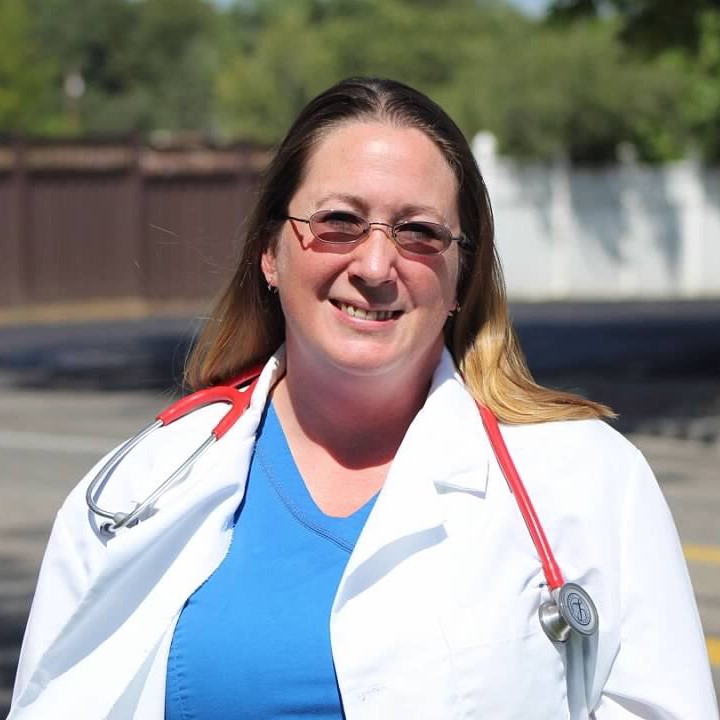 Dr. Canon was raised in Little Rock, AR. She graduated from LSU veterinary school in 2006 and met her husband while in school. They moved to Albuquerque for her internship where her daughter, Arianna was born. Her son Austin was born in New Orleans when they moved back closer to family. The Canon’s bought their first house in Idaho Springs and have been in Colorado since 2015. The family also includes 2 rescue dogs, Delilah and Leah, and Dillon the orange tabby. They enjoy skiing and camping as a family in off time.

As a veterinarian, Erica believes in wellness testing throughout life in order to diagnose disease earlier, as well as good nutrition and dentistry to keep pets healthy. 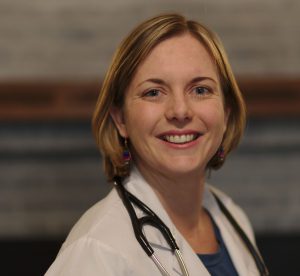 Dr. Bolinger grew up in Germany for 8 years before moving to Tennessee in middle school. She always wanted to work with animals and got her first taste as a veterinarian assistant in high school. This is when she realized her passion for veterinary medicine. Dr. Bolinger attended the University of Tennessee and earned her undergraduate degree in Biology, before attaining her Doctor of Veterinary Medicine in 2011 from Ross University. After practicing in Florida for a year, Dr. Bolinger moved to Colorado in 2012 where she continues to practice. Her interests include ophthalmology, surgery, dentistry, and arthritis pain management.

She also enjoys gardening, skiing, and exploring the great outdoors with her husband, kids (Dexter and Delilah) and her dog, Heartbeat.

Kelli began working for Jefferson Animal Clinic in 2001 as a receptionist and over time has become the Director of Administration, doing everything administrative to keep the clinic organized and well staffed. She received a Bachelor of Arts degree in Biology from Western State College of Colorado in 1999. As a Certified Veterinary Practice Manager (CVPM), she has achieved the industry’s highest credential for practice management professionals, demonstrating the experience, knowledge, and her commitment to the pursuit of excellence in veterinary practice.

Kelli is also known as Momma, to her three wonderful children (Korri, JJ and Tristan). She enjoys spending as much time with her kids as possible and running marathons.

Shaun was born and raised here in Colorado. He graduated from Bel-Rea Institute in March of 2011. He then joined the team at Jefferson Animal Clinic in August of 2011. He lives in Lakewood with his wife, two kids, three dogs, a goldfish, and a rescued pigeon. His hobbies are skiing in the winter, and Camping/Fishing in the summer. 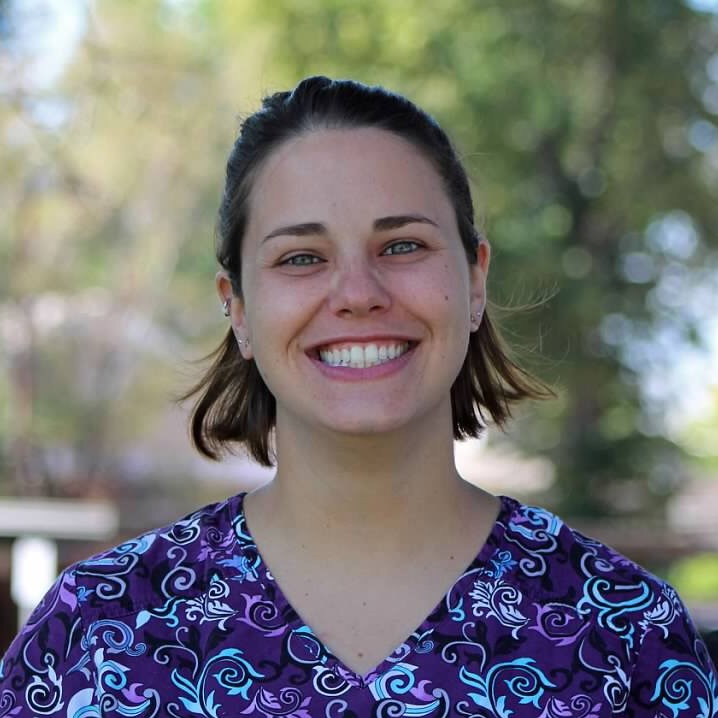 Angela joined Jefferson Animal Clinic in the summer of 2015 after moving here from Columbus, OH. Angela studied Biology for a year and a half at the University of Dayton, then she decided to pursue her love of animals and attend Bradford School in Columbus. After receiving her license she started her veterinary technician career at Oak Creek Veterinary Hospital. Angela was born in Westerville, OH and is the youngest of four children. She has a cat, Linus and a dog named Charlie. She loves to travel and go hiking in her spare time. 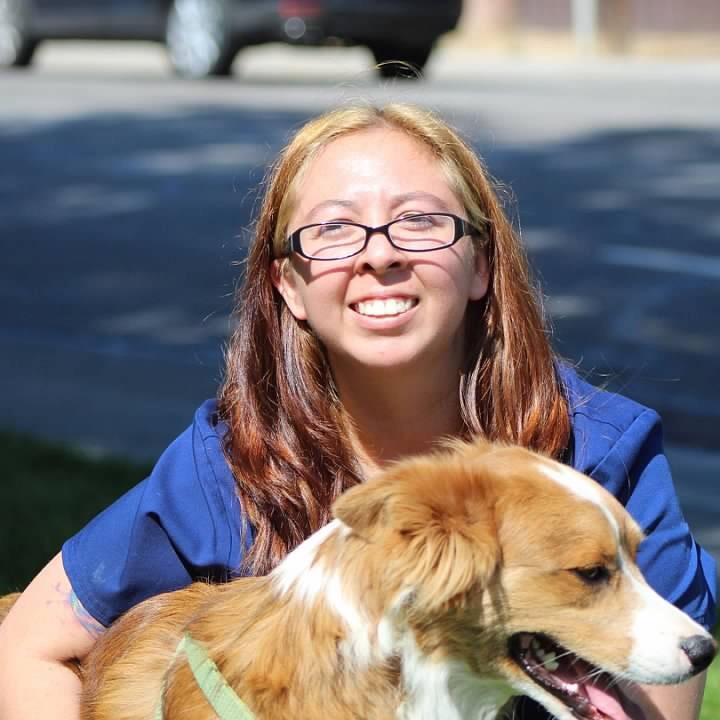 Alex graduated from Pima Medical Institute April of 2016 with her associate’s degree in veterinary technology. She has been in the veterinary field since she graduated, and joined the Jefferson Animal Clinic team August of 2019. Alex was born in Santa Fe, NM and moved to Colorado when she was 4yrs old. On her days off she enjoys reading, listing to music, and spending time with her dog Floki. 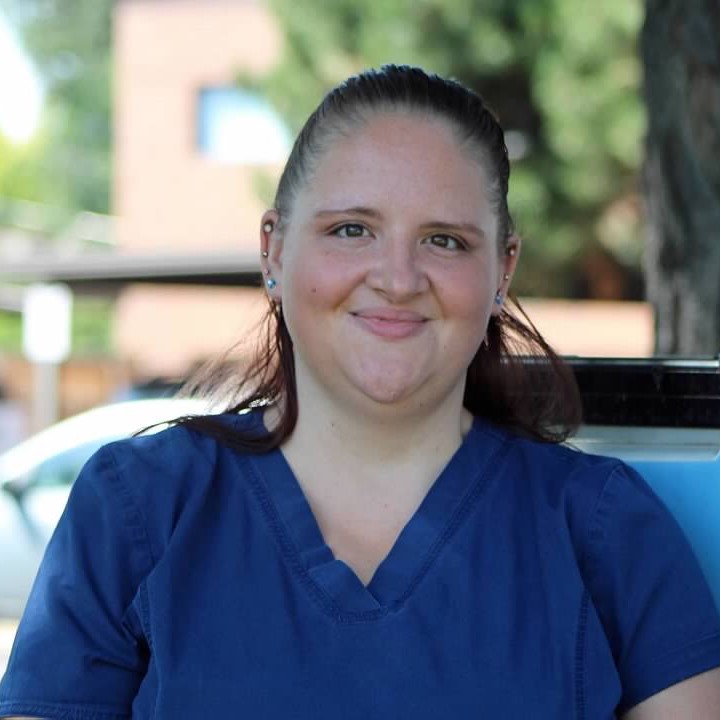 Rebekah is a native of Colorado and went to the Community College of Denver and graduated with her associate’s degree in veterinary technology in 2016. She joined Jefferson Animal Clinic in the summer of 2019 after 5 years at Animal Urgent Care. She has a family that supports her in every way and a great man, beautiful daughter and crazy dog Charley. During the summer and days off we all love to be outdoors and spend time with our families. 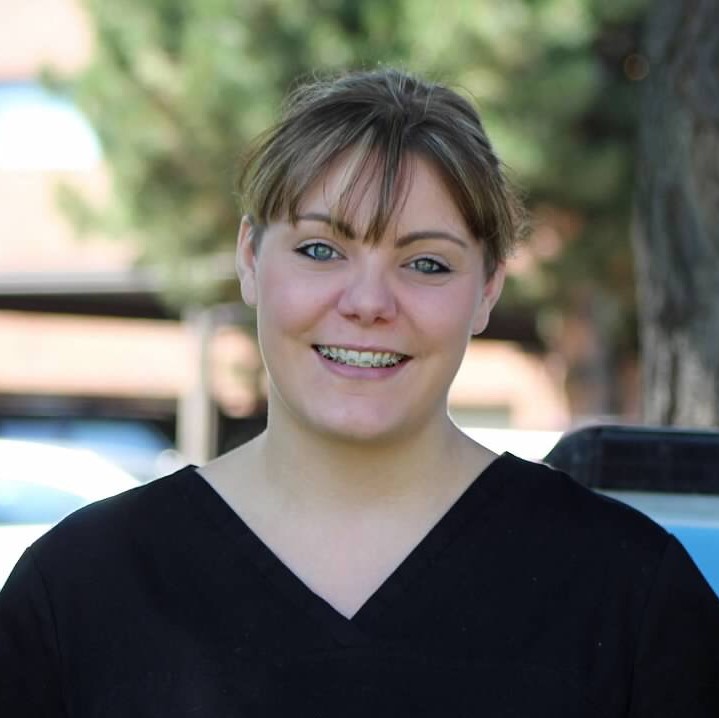 Katelyn started at Jefferson Animal Clinic in the fall of 2018 as a Receptionist and has been trained as a Veterinary Assistant and is now working behind the scenes with our clients more and more. One day she hopes to open her own rescue and help animals find their forever homes. During her free time she enjoys spending time with family and friends along with good music, food and drinks! 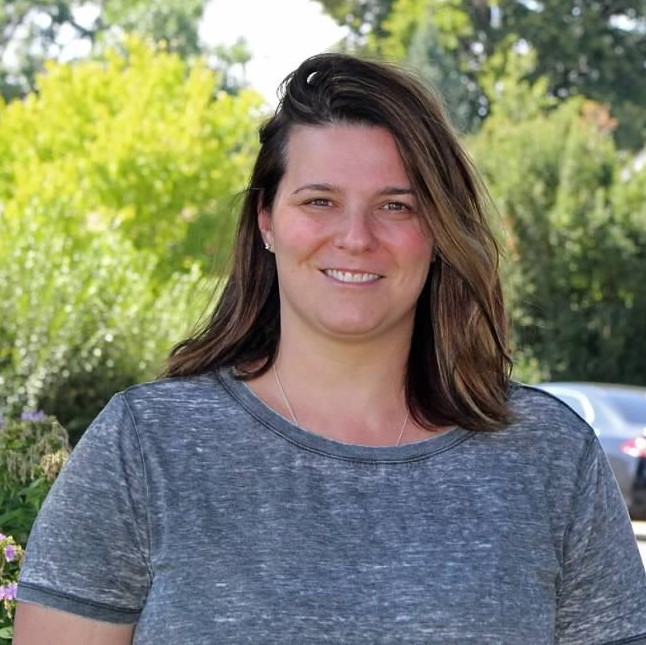 Erin joined the Jefferson Animal Clinic team in the fall of 2018. She has worked in veterinary medicine for over 4 years. When not at work she enjoys spending time with her husband, Travis, daughter, Eleanor and the dog, Tonka. She enjoys exploring the outdoors and attending concerts in her spare time.